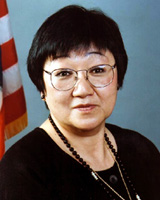 Sharon M. Fujii is the Regional Administrator for the Administration for Children and Families (ACF), Region IX, San Francisco. She is responsible for overseeing the operations and implementation of a broad range of Federal programs that address the needs of children and families, which are administered by States, Tribes, and other grantees in the Region. The Region includes Arizona, California, Guam, Hawaii, Nevada, the Outer Pacific.

Before assuming her current position in 1991, Ms. Fujii had served since 1987 as Regional Administrator of the Family Support Administration, and since 1981, she was the Regional Director of the Office of Refugee Resettlement in Region IX. She was an HEW Fellow assigned to the Regional Director (San Francisco) in 1978. She has also worked in the private sector for a consulting firm and a university, and a non-profit agency in Los Angeles. She has worked or interned with Seattle City government and with State government in Olympia, Washington.

Ms. Fujii received her Bachelor of Art's degree in political science and a Master's Degree in social work from the University of Washington. In 1975, she received a Ph.D. from the Heller School at Brandeis University.