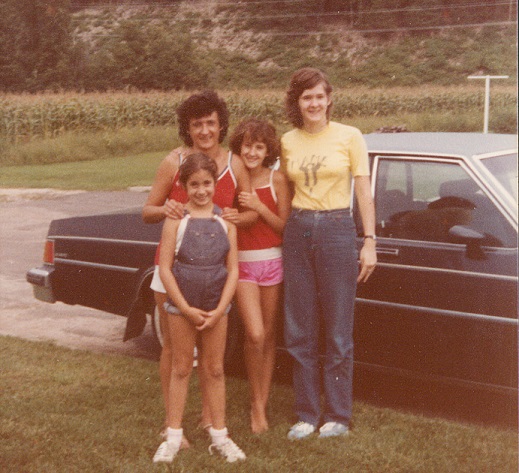 Until I was 10 years old, my sisters and I had a great Midwestern family life — a dad with a full-time job, a mom who made extra money cutting and styling our relatives’ hair in the kitchen, and a beagle named Scooby. When I was in 4th grade, my parents divorced. The custody battle was long and nasty, which was hard on everyone. As was the practice in the 1970s, my mother eventually got custody of my sisters and me. The court ordered dad, who was a truck driver, to pay $45 a week in child support.

The divorce was very hard on dad. He got to see us every Sunday. When we moved 75 miles away, the visitation schedule was changed so that he took us to his house every third weekend from Friday night to Sunday afternoon. After a few years of this, dad started drinking, became an alcoholic and lost his job at the trucking company. He then fell behind on child support payments. He sobered up for a while and got a job as an independent trucker. One January day, he slipped off his icy rig and broke his arm. The company fired him because he could not work. He started drinking again.

Dad spent time in jail for drunk driving and never held another trucking job. With only a high school education, no other real skills, no drivers license, and a criminal record, his elderly, widowed cousin, Mary, gave him the only work he could find. He maintained her yard and took care of her house because she lived alone. Mary paid him in cash — “off the books” — so to speak. It wasn’t enough to allow him to pay child support, and without a drivers license, he couldn’t see us.

Because mom didn’t earn much on a hair dresser’s salary, we qualified for government food stamps, which is now called Supplemental Nutrition Assistance Program (SNAP). She hated having to use them to pay for groceries, but we didn’t have a choice. Being the oldest of the three children, not having child support also meant that I couldn’t go to college after high school. I chose to go into the military so that I could save the money to pay for college myself. Without me at home, mom had more money to support her and my younger sisters. Dad died in 2001. Mom told me years later that he still owed her $30,000 in back child support.

There were almost no programs to help our family back then. Today, as I work in the federal Office of Child Support Enforcement, I see nonprofit organizations and government agencies that are actively trying to help parents in a variety of ways, particularly ones like my dad who have lost jobs and fallen behind in their child support. There are also programs to help parents understand how critical their roles are as moms and dads, and why participating in their children’s lives is so important.

I am incredibly proud of OCSE’s recent March-April Child Support Report newsletter about incarceration and reentry issues in child support. The edition showcased states that are helping parents earn diplomas or general education equivalent certificate, and teaching them new skills so they can find jobs to make a decent living and pay child support regularly. Other states help parents during and after incarceration by teaching them how to be better parents and find good jobs after release. Thanks to these types of assistance, many of these noncustodial parents are becoming part of their children’s lives again. A program like might have helped my dad.

Studies show that children with two involved parents have better chances at healthy, productive lives. Many child support workers, including those of us at the federal level, are working together to find ways to take care of the children by assisting the parents who just need a helping hand. It’s one of the many positive changes to the child support program since my childhood and I’m proud to be a part of it.

50 Years of Service to Children, Families and Fathers