Skip To Main Content
Family and Youth Services Bureau
An Office of the Administration for Children & Families
Expand
You are viewing content from the ACF Archives that is no longer current but remains on our site for reference. 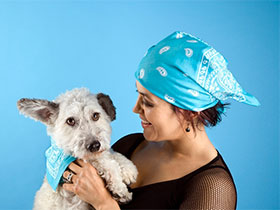 Tania* was so terrified, she was trembling. She had tried to hide her bruises and black eyes one too many times, but this time when Frank* left for work, she finally mustered the courage to leave. She would go anywhere, as long as it was far away from the man who used her as his punching bag.

She packed her suitcase with just a few pieces of clothing, her phone, and what little cash she had tucked away. As she walked toward the front door with the suitcase, Tania looked into her little dog Cookie’s sweet, loving eyes. Tania’s heart instantly sank. She dropped her suitcase, burst into tears, and ran over and scooped up this innocent creature who was the most precious thing in her life—a source of comfort, love, and trust for many years.

Frank had isolated Tania from her family and friends over time, but Cookie was always there to lick away Tania’s tears and snuggle, reminding her that she was loved, even when it meant hiding behind a locked door in the bathroom with no dinner that night.

As Tania held Cookie in her arms, she realized she simply couldn’t leave her behind because she knew that her husband would turn his rage toward the dog again. Only this time, realizing that Tania had left him, he could severely injure Cookie or leave her somewhere to die, scared, alone, and in pain. Tania couldn’t bear the thought.

“When someone needs to leave a dangerous home, she wants to take those she cares about with her—her children and her animals,” said Sharon Jonas, program manager of the Companion Animal Rescue Effort (CARE) at Animal Protection of New Mexico (APNM). “Since very few domestic violence shelters allow animals, many domestic violence victims feel stuck and don't know where to go with their animals. CARE was created to form a network of resources to respond to this critical need in the community.”

The Family Violence Prevention and Services Act (FVPSA)-funded New Mexico Coalition Against Domestic Violence (NMCADV), determined to offer solutions for women and their pets escaping a violent home, partnered in 2014 with APNM to significantly expand the role of the CARE program with a Senate bill sponsored by State Senator Nancy Rodriguez. CARE empowers domestic violence victims to escape their violent homes by providing safe, temporary, confidential housing and care for their companion animals through a network of animal shelters and safe havens around the state.

“Up to 65 percent of domestic violence survivors either delay leaving an abusive relationship or decide not to report their situations at all due to concern for their animals’ welfare,” said Shana Aldahl, special projects coordinator for the NMCADV. “The CARE program not only attempts to do away with this barrier for survivors, it also helps bring public awareness and education to our communities on the link between human violence and animal abuse.”

By providing a network of resources such as caring foster homes, trusted boarding facilities, safe transport, and veterinary clinic services for pets, CARE allows victims of domestic violence peace of mind to focus on themselves and find the resources they need to get back on their feet—and finally, to be reunited with their devoted companions.

The program’s goal is to provide shelter for all types of animals in every area of the state. The CARE network also ensures all CARE program staff members receive training in domestic violence advocacy for the increased well-being of animals and families.

The 2015 New Mexico Legislature continues to support the joint effort between the NMCADV and APNM to increase the CARE network of foster homes and veterinarians in New Mexico and provide options for domestic violence victims.

Since July 2014, CARE has assisted more than 96 domestic violence survivors and 162 companion animals. Its workshops and presentations have reached more than 1,000 people at domestic violence programs, veterinary clinics, boarding facilities, and other animal-related businesses throughout the state. Working together, the CARE network in New Mexico makes a real difference and provides much-needed support to families experiencing domestic violence.

*Names and details have been fictionalized.