Final child support statistical and financial data reports are required to be submitted by the end of December each year. It takes several months before we are able to publish the Preliminary Data Report, usually around April or May. It takes considerably more time to prepare and publish the more detailed Annual Report to Congress. We hope to have that completed before the end of this calendar year. In the meantime, this blog provides a preview of the 2016 national child support data. 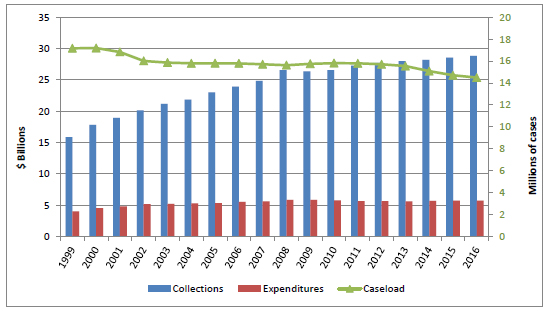 As shown in the above graph, trends that started several years ago continue into FY 2016. For example, we continue to see a small rate of increase in collections that began after the end of the 2007-2009 recession. Since FY 2009, total distributed IV-D collections have increased 9 percent or an average of a little over 1 percent per year. A similar increase emerged in FY 2016, when total distributed IV-D collections reached $28.8 billion, a 1 percent increase over FY 2015. We are seeing these increases in spite of the declining caseload. Over this same period the caseload has fallen by 8 percent. This means that average collections per case have increased by 19 percent during this period, or just under three percent per year.

In contrast to collections, expenditures (investment in the program) have not returned to their FY 2009 level. Since FY 2009, expenditures have declined $122 million or about 2 percent. In FY 2016, expenditures were $21 million less than in FY 2015. In addition, full-time equivalent staffing numbers have decreased every year since 2006, and this trend continued into 2016 with an additional 2 percent decrease.

Child Support Performance Is at an All Time High

We hope to drill down into some of these numbers and trends and provide more analysis on these issues in subsequent blogs. We look forward to hearing your views.