The national caseload for the child support program stood at 14.5 million cases in FY 2016, down 8 percent since FY 2010 after holding relatively steady at 15.6 to 15.9 million cases between FY 2003 and FY 2010. Although the national caseload has been declining recently, performance continues to improve and the child support program still serves nearly 16 million children, or about one in five children nationwide. In this blog, we explore why the caseload has been declining since FY 2010. 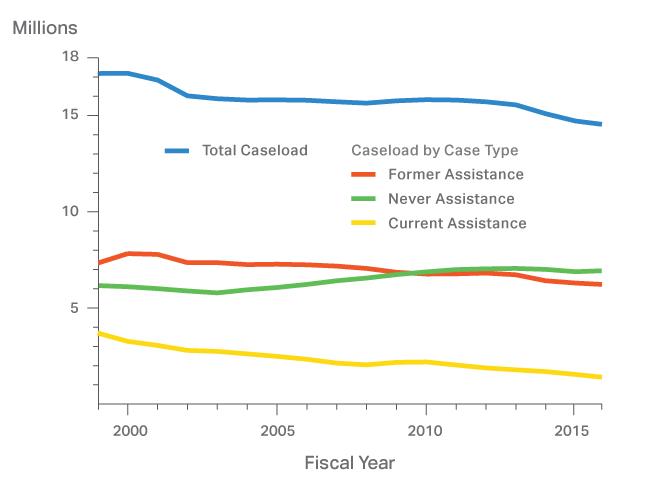 To assist in this conversation, we have provided a link to national and state caseload trends below. While the decrease in child support caseloads is a national trend, data shows that there is a great deal of variation among the states.

The child support caseload has been divided into the following three categories since FY 1999:

Current Assistance Caseload Cut by More than Half

The former assistance caseload has also experienced a decline since FY 1999. It declined from 7.3 million to 6.2 million cases, a 16 percent decrease. However, it increased slightly in FY 2011 and FY 2012, following the increase in the current assistance caseload during the recession. Since then it has declined by 9 percent.

We invite you to share your thoughts about the reasons and implications for changes in the child support caseload. View national and state caseload trends.