Do Parents Who Owe the Most Child Support Debt Have Reported Income?

In this blog, we continue to analyze data on parents who owe more than $100,000 in child support debt, also called arrears. We’ve established that these parents owe 22% (roughly $25 billion) of the $114 billion in past-due child support but account for only 3% of the 5.5 million delinquent-parent population (see Trends in Child Support Debt Amounts). On average, they owe more than $150,000 each, while the other 97% of parents owe about $17,000 each.

This time we explore the group’s potential ability to pay based on their reported income. In a random sample, we matched debtors in the OCSE Federal Offset Debtor File as of April 2017 to their reported income data in the National Directory of New Hires (NDNH), a database of wage and employment information that helps child support agencies locate parents, establish paternity, and collect child support. Below, you can see the results from that match, focusing on those who owe more than $100,000. 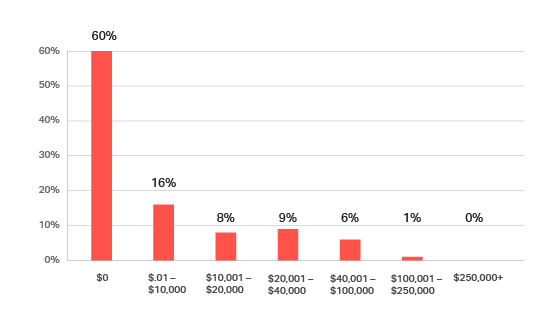 Employment Status of Parents Who Owe Over $100,000 in Arrears

The graph shows that the majority (60%) of debtors with more than $100,000 in arrears had no reported income in the NDNH.

Those with arrearages over $100,000 could be self-employed or have other earnings not captured by the NDNH. Income data in the NDNH is a combination of quarterly wages and unemployment insurance benefits submitted to states, and typically does not include self-employed income or other forms of income unless it’s reported through quarterly wage submissions. Recent data Visit disclaimer page  from the Bureau of Labor Statistics estimates that 10% of the U.S. workforce is self-employed.

We look forward to hearing your views. Please send comments to DPSAsupport@acf.hhs.gov.