Each federal fiscal year, state child support agencies are required to complete and submit a quarterly financial report to OCSE. Information in the report is used to determine eligible expenditures for federal funding and to calculate quarterly grant awards. Total expenditures are calculated by adding IV-D and non-IV-D administrative costs, incentive spending, and automated data processing (ADP) development and operations costs, and subtracting fees and interest. Below is a brief explanation of each type of expenditure:

We explored the trends in total child support expenditures over a 7-year period by first looking at those related to IV-D and non-IV-D administrative costs, and then at other associated costs. 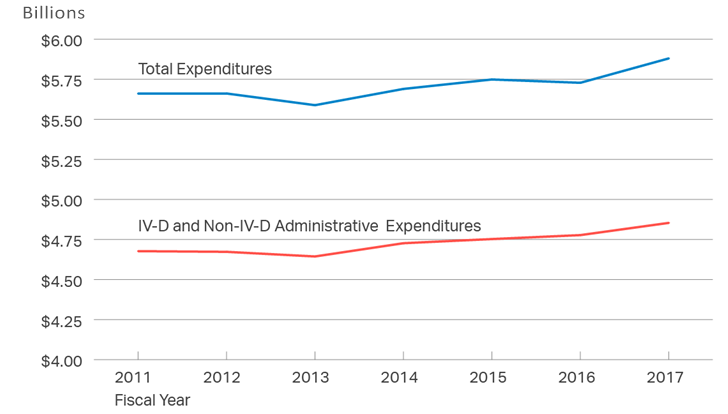 To understand why total expenditures grew faster than IV-D and Non-IV-D administrative expenditures in 2017, we examined the other components of expenditures, which are incentive spending, ADP development expenditures, ADP operation expenditures, and fees and interest (used to offset expenditures). Figure 2 displays these other expenditure components over the 7-year period. When looking at these other expenditures, we found that only ADP development increased in 2017 ($72 million). This 49% increase was driven largely by one state’s ADP expenditures of $67 million. The other change in 2017 was a significant decline in fees, interest, and other income that states collect and use to offset administrative costs. This decline is due largely to the uneven reporting of fees in one state and a large decrease in interest and other income in another state after a large increase in 2016. 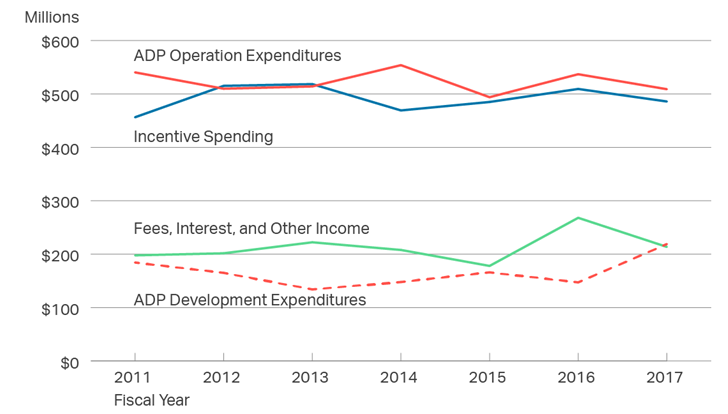 OCSE anticipates that ADP expenditures will increase as more and more states embark on modernizing their current child support systems that were built over twenty years ago. There is an increasing need for states to modernize their legacy systems to stay current and take advantage of the technological advances. In 2017 and 2018, there has been an increasing trend for states to conduct feasibility studies as part of the Advance Planning Document process to determine whether a new system is viable. Many of these states will most likely start developing their new systems in 2019.

We welcome your comments. Please send them to DPSAsupport@acf.hhs.gov.