FISCAL YEAR 2014 STATE SPENDING FROM ALL

The Child Care and Development Fund (CCDF) financial expenditure report (ACF-696) details expenditures from each of the CCDF funding streams (Mandatory, Matching, and Discretionary), as well as funds transferred from the Temporary Assistance for Needy Families (TANF) program to CCDF. Reported expenditures are for administration, direct and non-direct services, and quality activities including congressionally mandated targeted funds for:  (1) Child Care and Quality Improvement Activities; (2) Infant and Toddler Quality Improvement; and (3) Child Care Resource and Referral and School Age Care. States continue to report on their expenditures of CCDF funds for each grant award year until expended.

The summary provides information on the expenditure of CCDF funds during the Fiscal Year (FY) 2014, which includes funding from the FY 2012, FY 2013, and FY 2014 CCDF appropriations. The CCDF expenditure data are reported by states and territories on the ACF-696. States expended a total of $8.4 billion of combined federal and state funds, which includes both CCDF and TANF transfers into CCDF. Expenditures of federal CCDF funds were $6.3 billion, comprised of $5.1 billion from FY 2014 and $1.2 billion from FY 2013 and FY 2012. Expenditures of State Matching and Maintenance of Effort (MOE) funds were $2.1 billion. Some states report state expenditures in excess of the state share amounts required to draw down their full allotment of federal Matching funds; however, they are not required to do so. In FY 2014, about $26 million in “excess” State Match and MOE expenditures were reported.

1  Expenditures may be negative because of changes in reported excess State Match and MOE in prior fiscal years.

Direct Services. CCDF expenditures on direct child care services were $6.6 billion or 79 percent of total federal and state expenditures (including MOE) in FY 2014.

Quality Activities. States spent $958 million (including targeted funds) or 11 percent of total federal and state expenditures in FY 2014 on quality activities. This exceeds states’ required spending of approximately 7 percent, taking into account both the statutory minimum requirement and additional targeted quality funds in the annual appropriations process. The statute requires that a minimum of 4 percent of CCDF expenditures be spent on quality activities (excluding targeted funds) and applies to individual appropriation years. Compliance with this requirement is assessed at the end of the liquidation period. In 2014, congressional appropriations targeted additional funds toward quality in the following categories: (1) Child Care and Quality Improvement Activities; (2) Infant and Toddler Quality Improvement; and (3) Child Care Resource and Referral and School Age Care. Note: The reauthorized Child Care and Development Block Grant Act of 2014 increased the required amount of CCDF expenditures that States must spend on quality activities. These increases become effective in FY 2016 and do not apply to any of the funding years included in these tables.

Administration. During FY 2014, states expended $242 million or 3 percent of total federal and state expenditures (including MOE) on administrative activities. The statute limits CCDF administrative expenditures from each grant award year to no more than 5 percent. Compliance with this requirement is assessed at the end of the liquidation period. 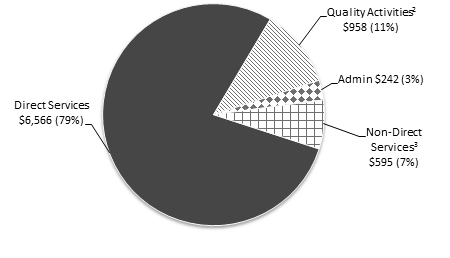 2 Quality Activities include the expenditures of targeted funds.

3 Non-Direct services include expenditures related to the operation of voucher programs, eligibility determination and re-determination, and developing and maintaining computer systems.

Unliquidated Obligations. Of funds that have been obligated, states reported unliquidated balances of $912 million.