Building maintenance jobs generally are not highly sought after by people looking for jobs, nor are they well paying. Yet, they can be effective entry level jobs. Every medium- or large-scale building requires maintenance, so the need for these jobs remains consistent.

New Economics for Women (NEW), Visit disclaimer page a successful community development corporation in Los Angeles, California, attempted to use its 2009 Community Economic Development grant to create a building maintenance business that would achieve three goals—(1) make a profit, (2) employ low-income residents of the community in which the jobs are located, and (3) use green cleaning devices and materials.

New Economics for Women is about 30 years old, started by five Latina women in 1985 who believed that community development in Los Angeles could benefit from a focus on women and children. Their idea was that “affordable housing, a safe environment, and financial know-how are crucial elements to creating economic security and the transformation of an entire family.” So the founders designed a new community development corporation (CDC) with two main principles:

NEW has been a success and is now one of the largest CDCs in Los Angeles. Its programs are divided among three areas:

To date, NEW has developed about 900 new apartments and is concentrating much of its activity in three Los Angeles communities, integrating housing with health, children’s programs (e.g., child care, charter schools), economic development, case management counseling, and other programs. In all cases, its projects and programs involve significant community input. As a part of a coalition of Latino community organizations, NEW worked on the Neighborhood Stabilization Program (NSP) foreclosure programming in the city, helping to buy, rehabilitate, and resell more than 60 houses.

With many programs involving many hundreds of families, NEW looked for opportunities to create jobs. It realized that its own properties might create just such an opportunity. In about 2008, it sought to form a for-profit subsidiary to undertake the management of some of its properties and to sell services to other property owners. In 2009, it received a Community Economic Development grant in the amount of $329,553 to help create Socos, a property management firm to employ area low-income residents. 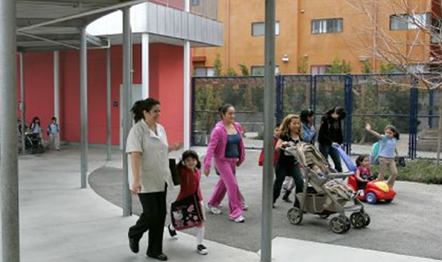 The goal of Socos was to employ at least 16 low-income people to provide janitorial, property management, and landscaping services around Los Angeles. The workers were to be paid at least $10 per hour plus full benefits. At its height, Socos met these goals.

Socos was able to use NEW’s relationships with some of the other area nonprofit organizations to gain contracts for property management functions. For example, Socos assumed janitorial responsibilities for a community center operated by nonprofit Central City Neighborhood Partners. Socos also took over property management for NEW’s charter school, as well as more than 18 vacant homes that NEW bought with NSP funds prior to their resale. In all, Socos won contracts for about six large sites and the 18 homes.

Socos also had a working partnership with a nonprofit workforce organization that referred eligible low-income job seekers. Most of Socos’ low-income workers came from the Pico Union neighborhood in which NEW started its work, and the San Fernando Valley, where most of the NSP homes were located. In fact, about a quarter of all the people hired by Socos were residents of NEW developments. Not only did the workers receive decent wages and benefits, but each was also eligible for computer and life skill training through NEW’s programs, training in the use of appropriate machinery and chemicals, and CPR training.

This reflects the CDC’s general model of layering services for its clients and residents. As NEW Executive Director Maggie Cervantes says, “All of our work is closely tied to the people we serve.” Thus, they try to “make people more employable,” in this case, understanding that maintenance work is an entry job for many and not the endpoint of their careers.

Nevertheless, several months into operation, Socos started experiencing problems. Property management—at least as practiced in Los Angeles—is replete with firms that pay minimum wage and minimal benefits or with arrangements among independent contractors who avoid having to pay any benefits to employees.

Socos, though, paid higher wages plus a package of benefits. On top of this, it found that the premiums for its workers’ compensation insurance doubled from $50,000 per year to $100,000. Workers’ compensation premiums in the State of California are typically very expensive, and more so for industrial segments deemed dangerous, such as those involving machinery and chemicals.

Because of the higher wage scale and extremely high workers’ compensation premiums, Socos found that it could not compete with other property management firms on new contracts. As Sandra Villalobos, NEW’s vice president of operations, said, Socos often was the highest bidder in open competitions. It had to price its services at about $16 per hour, while winning bids often were closer to $10 an hour.

This meant that NEW and Socos leadership had to try to reconfigure the operation and lower costs, while also meeting their employment goals. They looked at options such as incubating a worker cooperative or acting as a facilitator for independent contractors looking for work. Either option could have shifted workers’ compensation costs to the contractors or new entity. Eventually, though, with NEW investing up to $25,000 a month to close the income gap, NEW and Socos leadership decided to end Socos as an independent entity.

But that is not the end of the story. As NEW’s Ms. Cervantes says, “Our role as a nonprofit is not just to provide jobs, but to offer services, training, and nurturing.” Some of the training NEW provided was on business basics, financial literacy, and life skills. This training benefited many of the workers that Socos had hired.

In fact, one of Socos’ hires started his own landscaping business in the area east of Los Angeles. He is now able to support his family of seven from his new company. Another started his own office cleaning business, employing part-time staff, which avoided some of the financial issues Socos faced. A third was retained by NEW as a maintenance supervisor. Others were hired by NEW as desk clerks or janitors for NEW’s housing developments. As a result, many of the former Socos staff landed on their feet.

What Happened to this Project?

The original project goal—creating and sustaining a new property management company that would employ low-income people—did not work out as planned. Nevertheless, many workers of the company gained skills and went on to other work, including owning their own companies in two cases.

Two issues emerged that impeded the success of the project. First, the nonprofit did not fully understand the financial implications of starting a maintenance business in California and faced significant increases in workers’ compensation premiums because of the way the company was structured. Socos could not absorb what amounted to more than $6,000 in unexpected costs for each maintenance staffer.

Second, the company was not capitalized sufficiently. Without capital, Socos could not weather the costs of the start-up phase, unexpected expenses, and the need to “subsidize” costs while adjustments were made. When gaps emerged between income and outlay, Socos had to rely on cash infusions from NEW.

On the positive side, NEW demonstrated resilience, built on its community knowledge, and showed its ability to take risk. As new contracts became elusive, it started looking at optional structures for the company. Its broad set of programs proved helpful for the employees; the training enabled them to figure out what to do when Socos closed. NEW’s community connections contributed to the ability to secure maintenance contracts early in Socos’ existence.