Small communities, especially those outside of urban centers, seldom have a place for residents to gather and socialize. Those that do typically benefit from restaurants and cafes that function as informal community centers; however, when these businesses close, the community suffers. Not only is the interaction lost among the residents, but so are the jobs.

East Missouri Action Agency (EMAA) Visit disclaimer page faced this situation in one of the communities it serves and took action. In Park Hills, Missouri—a small community about 70 miles south of St. Louis—the local restaurant closed due to a foreclosure. EMAA surmised that reviving the restaurant could provide a sit-down place to eat and create jobs, but also spur further community revitalization. In the words of EMAA Community Services Director Keri McCrorey: "As a community action agency, we try to be innovative and look for new ways to lift people out of poverty."

The EMAA was founded in 1965 and serves a population of about 240,000 across eight counties in southeastern Missouri. The area is very rural, with most of the families engaged in agriculture or commuting to St. Louis or Cape Girardeau for work. When EMAA sought a CED grant, the service area had a poverty rate slightly less than 17%, higher than the state and national rate.

When the restaurant on Main Street in Park Hills closed, EMAA looked for ways to reopen the restaurant as a job producer and revitalization anchor. It conducted studies and concluded that they could operate the restaurant as a program of the organization. The organization had never run a business before, but it had run many programs for years (e.g., Head Start, women’s health clinics), acted as a contractor in weatherization and construction, and had been a general partner in an apartment development. EMAA applied for and used a 2008 Community Economic Development (CED) grant of $687,000 to buy the building from the agency that held the foreclosed note and clean up the restaurant.

Once the old restaurant was cleaned up, EMAA hired staff to run the operations and opened the restaurant under its previous name, The Main Street Grill. The restaurant operated using this model only for a little more than a year. The restaurant opened in 2009 as the national recession set in, reducing the customer base. Local residents, like people everywhere, cut back on spending. As EMAA’s Ms. McCrorey says, “No one was going out to eat then.” Another problem EMAA faced was staff costs; as EMAA employees, staff was earning more than the area comparable wage for restaurant workers. The organization had to put its own funds (about $300,000) into the project to keep it going, an approach that was not sustainable.

Losing money, the organization switched gears and made the restaurant an independent corporation, reducing wages and benefits to the area market rates and shielding EMAA from further risk. The restaurant operated in this manner for only six more months before it closed. Under EMAA control, the Grill stayed open a total of two years.

As Ms. McCrorey says, “We thought it was a good project idea; we did our research, but it just didn’t work.” The community action agency could not afford to continue losing money to pay wages and benefits. Its location was not ideal since the hoped-for revitalization of Park Hills was not happening during the national recession.

Changing Direction to Get the Restaurant Going Again, Or the Third Time Is the Charm

EMAA ultimately exceeded its goals by changing its methods of managing the restaurant and receiving a one-year extension from the Office of Community Services for the CED grant. 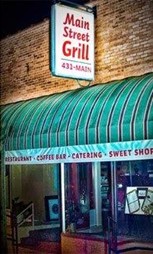 The new operators are hiring and training low-income people to work at the restaurant, using EMAA to find workers. At the close-out of the CED grant, 22 low-income people were working on site, surpassing the original project goal of 17 jobs. EMAA indicates that it recruits workers through its other, ongoing programs and through referrals from the state TANF agency.

EMAA has remained in the economic development business, becoming an incubator of new business ideas. As the Community Services director says, “some fail and some succeed, but we’re alright with that since we’re moving forward and learning.” It has established a small business of revolving loan funds, thanks to a few grants it has recently received.

The East Missouri Action Agency saw the revival of a closed community restaurant as an opportunity to create jobs and spur the revitalization of its neighborhood. It took three tries to make it work, but it succeeded. It found a responsive and experienced partner who knew how to run a restaurant and was willing to hire low-income workers.

EMAA certainly showed its resilience. When it could not run the restaurant as a direct organizational program, it spun the restaurant off as a separate corporation. When that also did not work, it found an experienced partner who knew how to operate in the low-margin food service field.

The organization also benefited from a variety of partnerships in this project—not only the new partnership with the restaurant operator, but many older partnerships established over EMAA’s 40-plus years. Its partnership with the Missouri Research Corporation, a nonprofit corporation established by Southeast Missouri State University, brought money to help pay for kitchen equipment. The Missouri Career Center conducted culinary classes for potential workers. In the words of EMAA’s Ms. McCrorey, they “had to teach people how to cut a tomato.” The former owner of the restaurant building—the regional planning group—was cooperative in the acquisition process, and the Church Army of the Leadbelt in Park Hills contributed volunteers to renovate the restaurant once EMAA had purchased it.