The Pacific Gateway Center (PGC) Visit disclaimer page is a Honolulu, Hawaii-based nonprofit organization formed by the local council of churches in 1973 to help serve the needs of Vietnamese and other refugees. That year marked Congressional action to end the formal U.S. involvement in the Vietnam War (even though Saigon fell two years later), and the churches could see the start of large numbers of immigrants coming to Hawaii from Vietnam and other Southeast Asian countries. At its start, PGC helped refugees learn English through ESL classes, get documents translated, and seek work permits. In fact, before 1999, the organization was known as the Immigration Center.

PGC later branched out to begin some economic development work, including micro-lending, and to serve low-income people who were not refugees. As part of the expansion of purpose, PGC honed its mission. “Aloha,” a Hawaiian concept of welcome and help, became the basic value for the organization. This concept of “Aloha” included a focus on food.

"Food,” says PGC Executive Director Dr. Tin Myaing Thein, “became a major theme for our organization.” It is especially important for immigrants and refugees because it can remind them of home. “It is a value to them.” In addition, many jobs in the food industry do not require high levels of English language skill.

To help solidify its food programming, PGC developed a certified kitchen that would be available for people who knew how to cook and had a product idea, but who did not have the funds to procure the space and knowledge to make their product idea workable. The Economic Development Administration funded PGC’s initial incubator kitchen, the largest in Hawaii. It enables clients to develop products they could sell at farmers markets (which proved to be an expanding market in the state), grocery stores, and specialty retail outlets.

PGC also started several programs to promote farming among its immigrant community. It helps budding farmers, some of whom may have been farming in their county of birth, with assistance in two “strands”—farming and business development knowledge. This U.S. Department of Agriculture-funded program graduated more than 50 people in 2013 alone. “This was a natural part of the vertical integration of our programs,” says Dr. Myaing.

Using CED to Develop a Historic Structure near Chinatown

In 2001, PGC was given a new opportunity when it was provided CDBG funds by the city of Honolulu to purchase a historic building near the city’s Chinatown from a coalition that had owned it. The building was in a potentially valuable location, downtown, and near a proposed light rail center. While PGC was planning a complete renovation of the building, it leased the space for various retail uses. 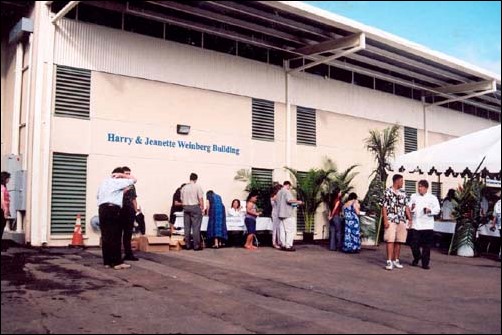 Then, in 2008, PGC applied for and received a Community Economic Development (CED) grant from OCS to renovate the structure for a variety of food-oriented and handicraft uses. There are really two success stories involved in this work: (1) getting the building renovated and (2) who is using the building now.

The building is a 125-year old structure protected by local historic regulations, but in such bad condition that Dr. Myaing said, “The bricks were held up by habit and nothing else.” The organization had to do extensive rebuilding, including a complete reframing, installing sprinklers, updating all of the internal systems, and providing for Americans with Disabilities Act compliance. The age and status of the building meant that PGC had to take extra care to plan all of the work and get approvals for everything. Not only were historic rules in place, but the city of Honolulu adopted a new building code after the lengthy building plan review period was over, and the PGC architectural plans had to be changed. The planning, fund raising, and reconstruction work took more than seven years. The total cost for the construction was about $4.5 million, of which $857,000 came from the CED grant. Other major sources included Honolulu CDBG funds, local foundations, and private donations.

Tenants in the Building

PGC planned for multiple uses in the historic building to take advantage of its location. Plans included an incubation site on the first floor, space for small retailers next door, and a business technical assistance center on the second floor.

PGC intended to operate a restaurant in the food-oriented space, but that did not work out. Instead, PGC formed a partnership with The Pig and the Lady to operate the restaurant. The Pig and the Lady is a popular, family-owned farmers market stand and pop-up restaurant owned by a Vietnamese family that had worked with PGC previously. It serves Vietnamese style foods described as a modern take on traditional methods and has won plaudits from local reviewers, including Honolulu magazine. The new restaurant committed to employing participants in PGC’s work training program and using produce grown on some of the PGC-assisted farms, and it did both. Owner and chef Andrew Le says that he is pleased to move from just being a farmers market vendor to a brick-and-mortar operation. “We feel it is time to take the next step in the incubation process.”

The adjoining retail space has also evolved. PGC had run a seasonal outlet at holiday times, allowing some of the handicrafters and value-added food workers to market their wares. Now, the new space is available year-round and provides a marketing opportunity for many of the small entrepreneurs PGC has helped for several years. Like with The Pig and the Lady restaurant, the leased space is filled with immigrants who have operated pop-up stores or had stalls at local farmers markets. Typically, the vendors worked part-time at sales and had little business experience. Now, they are able to sell on a more consistent basis and get business support from PGC.

For example, Mary is a local woman whose earlier small business failed during the recession. She started to make candies, including macadamia, almond, and peanut brittles. She is now selling full-time in the PGC retail center and doing very well. Another woman makes leis. Another makes and sells cookies; she, too, had been a farmers market part-time vendor. Other PGC vendors make gifts for tourists and locals (because the Asian culture is a gift-bringing one, Dr. Myaing explained).

Upstairs, PGC maintains its office and business technical assistance center. It is a full-service center, aimed at, as Dr. Myaing says, “socially disadvantaged and marginalized population sectors—immigrants, refugees, and low-income residents—to achieving self-sufficiency.” In addition to PGC’s center, the second floor includes an office for 14 workers doing outreach for the Affordable Care Act, aiming to ensure that small business owners and workers are able to secure health care.

As a result of the building renovations, PGC has supported the creation of 76 businesses; its original CED goal was one business (the restaurant). More than half of the businesses had been in operation at least a year when the CED project closed in fall 2013. The project helped create 79 jobs for low-income people, surpassing the CED goal of 54. Furthermore, it more than doubled its CED leverage goal by attracting almost $13 million to the facility and its businesses.

Pacific Gateway Center met and exceeded its goals for the Community Economic Development grant it received in 2008. It helped businesses, created jobs, and brought resources to the community it serves. It did so using its resilience and knowledge of the community.

PGC persevered through months of delays in renovating the building it bought—delays in the planning, receiving approvals, fund raising, and actual construction work. PGC also adjusted plans with regard to using the building. Instead of operating the restaurant itself, it found an award-winning chef who could honor his Vietnamese culinary heritage, while also employing low-income people trained by PGC and using produce grown in nearby farms supported by the organization. Local business law changes then caused problems for some of the tenants, especially with regard to health standards and rules. A less resilient organization might have had to give up before reaching the goal.

The organization’s success also can be attributed to knowing the local community and economy. Staff members knew many of the immigrant and other low-income people who tried to make a living in part-time sales at farmers markets, a number having received business advice from PGC. This relationship made it an easier task to persuade some of the more successful vendors to move into a brick-and-mortar establishment to expand their businesses into full-time work. Knowing, too, that the vendors could not afford “downtown” rents, even though the PGC site was downtown, it offered the retail space at prices people could manage.

So successful was PGC that it sought and received a second CED grant to pursue alternative energy projects and open a bottling facility in its ongoing kitchen incubator.

In a live webinar session on March 22, 2018, Dr. Tin Myaing Thein, Executive Director of Pacific Gateway Center (PGC) in Honolulu, Hawaii, shared, in her own words, highlights and important lessons learned from this project. Watch now!