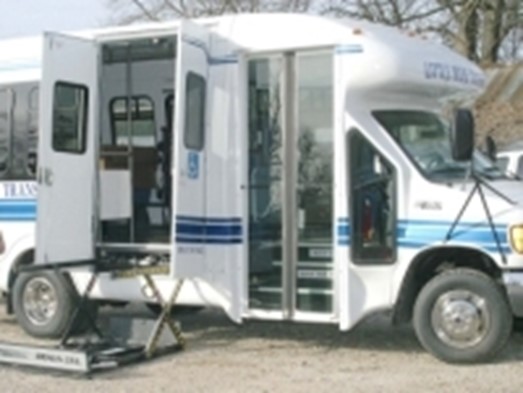 A truism of American life is that residents of rural communities enjoy fewer conveniently located vital services than urban dwellers. The economics of health care—or any other vital service, for that matter—dictate that not every small community or rural area can afford to have a dedicated team of doctors or other health care professionals. The same holds true for shopping centers, large grocery or drug stores, or other services.

The Little Dixie Community Action Agency (CAA) Visit disclaimer page , which serves low-income households in three counties in southeastern Oklahoma, decided that people in its rural service area deserved better access to good services. Rather than trying to build them locally, it decided to provide a transit service to take its residents to quality services and stores in nearby areas that already had them.

The organization was founded in 1968 through a merger of three smaller agencies. When it started, its budget was just slightly more than $600,000; it now handles almost $25 million a year. The total population of the three counties now stands at about 59,600, with 27% of the population living below the federal poverty line. That figure is 10 percentage points higher than the national unemployment rate. Nevertheless, the poverty rate has declined from 63% in 1970, the first year a census was conducted after the Little Dixie CAA was founded.

Little Dixie has undertaken efforts to reduce the poverty rate of the three counties it serves. Not only is it the second largest employer in the service area, it operates programs in five areas, including the following:

It is this last service—transportation—for which Little Dixie applied and received a Community Economic Development grant from the Office of Community Services in 2009. Little Dixie sought to expand the bus transit program it had been operating since 1983.

Little Dixie’s transportation program, SoonerRide, now includes more than 80 vehicles and 70 employees. Most of the vehicles are minivans, although Little Dixie also has a handful of larger vans and 16 small buses equipped with wheelchair lifts. The CAA’s budget for its transportation program reached almost $3.4 million for the 2013—2014 fiscal year. Funds come from the State of Oklahoma’s various state departments to support and transport TANF recipients to classes and child care and to transport people with health needs and disabilities that cannot be served in their community. With this funding, the SoonerRide program helps people eligible for Medicaid to secure dialysis (there are no dialysis centers in the three counties served by Little Dixie), cancer screening and services, and other health needs. Overall, the primary users are the elderly, students, people with health care needs, and those who need transportation to their jobs. Little Dixie’s service runs on a break-even basis: it charges riders $1 per ride and the state contracts are not profitable.

Little Dixie operates one of the most extensive transportation programs in Oklahoma, in large part because of the rural nature of its service area. The area has no taxi service or car rental agencies. One of its three counties, McCurtain, has the largest land mass in the state and is one of the poorest. Because there is so little density in the service area, most of Little Dixie’s transit system does not operate fixed daily routes; for the most part, its system is demand-response.

Nevertheless, there are a few fixed routes that support consistent, geographically fixed transportation needs. One such route operates between the towns of Hugo and Ft. Towson, Oklahoma. Hugo is home to a rehabilitation center that caters to elderly patients, and Ft. Towson has a private school. Every weekday, Little Dixie transports up to 25 elderly people and students back and forth between the towns.

With this successful and expansive system, why did Little Dixie turn to the Office of Community Services for a Community Economic Development grant? Its ongoing state funds are not allowed to be used to research new transit needs or experiment with new territories or routes, and the agency could not afford the manpower it would have taken to do the research without outside resources.

Little Dixie received $400,000 in CED funds in 2009. Its goal was to create six new routes to serve people living in some of the smaller towns of the region. In doing so, it planned to create 20 new jobs for drivers and support personnel. After three years, Little Dixie created four new routes and hired 20 people. Despite discontinuing other routes that were unsustainable, Little Dixie exceeded its original goal of 600 new riders and attracted more than 2,200 new riders on the routes.

Little Dixie was able to achieve this accomplishment under this grant because it specifically sought out new territory and smaller communities to serve, believing that seniors in these communities also needed access to health care and other people needed better access to jobs. One strategy was to identify places with large numbers of elderly. For example, a portion of Pushmataha County—a mountainous area—had a relatively large number of elderly and so Little Dixie kicked off new transit services. According to Jeanne McMillan, director of Little Dixie’s transit division, this new service “has been wildly successful.” About 15 to 20 times a month, vans take elderly to doctors and other health services, shopping, and for outings in a nearby mid-sized town.

Not every new route was successful. The Town of Millerton asked Little Dixie to start a service for its elderly people. The assistant mayor had made the initial approach to Little Dixie, and the agency asked for some confirmation that residents would be interested. The town generated more than 100 signatures on a petition asking for services, and Little Dixie responded by conducting community meetings and a launch party, as well as circulating flyers advertising the vans. However, there was very modest response from local residents. Little Dixie persevered for a year but folded its tents when it found little increase in ridership.. Unfortunately, according to Ms. McMillan, the CAA discovered that some towns have a stigma about using outside help, despite the fact that Little Dixie was offering a service that people seemed to request.

It is a learning process, says Ms. McMillan, “As a nonprofit, people expect us to do everything.” People help out, however, once they realize that it takes money—and ridership—to pay for the vehicles, gas, staff, and other support. “We’re the only ones who do what we do,” she says, which is why Little Dixie often finds strong support in the communities it serves.

The expansion of Little Dixie Community Action Agency’s transit system succeeded largely due to the organization’s longevity in the community. The service area is large and spread out over mountains and small towns, but Little Dixie knows its community of about 60,000 people well.

Second, it understands the local economy. It knows where there may be employment opportunities that might suggest transit demand. It runs a route, for example, for workers at a casino. In addition, it knows how to secure transportation money from the state to support health, social services, and other needs. Over time, it has learned how to determine good market opportunity and reach out to people in need of its transit service.

Lastly, Little Dixie has demonstrated a nice ability to take risks. It knows how to secure transportation money from the state to support health, social services, and other needs. After determining that it could sustain the existing system with current contracts, Little Dixie stepped out and sought outside CED grant funds to conduct research and build demand in new, previously unserved territory. This strategy enabled Little Dixie to eliminate unsuccessful routes like the one in Millerton, which did not generate the necessary ridership, without jeopardizing its operational budget and other funding relationships.