AFI Case Study: It Pays to Listen to Your Wife 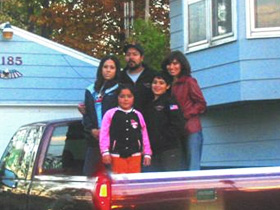 When Jose Edward Peña's wife, Maria, told him that he could double his savings with something called an Individual Development Account, he had doubts.  Maria had the same doubts when she first heard of the program, but she overcame her skepticism and contacted Iowans Save!, the IDA program operated by the Institute for Social and Economic Development (ISED) in Des Moines to learn how they could help her.

The IDA training program proved to be an ideal fit for Maria. Although she had been considering returning to school, she enrolled in money management and homeownership training classes instead; her kids were even allowed to go with her. “They sat with me and we studied together,” she recalled.

Then Jose Edward got interested. After a prison stint, he wanted to reestablish his family’s economic base.  He was working, but not getting ahead. "You come to a point in your life when you have to do something not only for yourself but for your family and kids. I wanted to leave something for them,” Jose stated.

He became convinced that IDAs were the way to go when he learned more about the program. After saving some money, he secured a loan for a course in driving big rigs. He obtained his commercial license, doubling his earnings, but the work required too much time away from home. He then landed a full time job working for a local construction company. His earnings jumped to about $900 a week. "I had made my first goal, which was to make at least $100 a day.”

But Jose wanted to start his own business. With the help of his Iowans Save! counselor, he built up his IDA savings. He learned how to file a tax return, track costs and income, and prepare a business plan.  Eventually Jose made a down payment on a small truck to do snow removal and soon had built a foundation of steady work.

The Penas then became homeowners. By living frugally, paying off debts, and continuing to work and save, they were able to buy a home with a large yard where Maria and the kids love to garden.

With the support of Iowans Save!, the Penas turned their lives around. “When I started the money management class, we wrote down what we wanted to accomplish,” Maria noted. “It actually did work out.”