The FY 2010 data referenced in this report were obtained from a statistically valid sample of TANF and Separate State Program-Maintenance of Effort (SSP-MOE) cases within the national TANF/SSP-MOE database. Data are presented for all States, the District of Columbia, Puerto Rico, and the Virgin Islands (hereafter referred to as States).

Tables 10:60 through 10:74 in the Appendix contain data on SSP-MOE recipient characteristics for the 17 States that reported on their SSP-MOE families. SSP-MOE eligible families may be quite different among the 17 States, as well as within a State where there are multiple SSP-MOE programs.

Under the TANF data reporting system, States have the option to submit either sample data or universe data to HHS.  Thirty-two States submitted universe data, from which HHS randomly selected approximately 275 active cases and 100 closed cases each month from each State to analyze.  The remaining 22 States submitted sample data.  A total sample of 217,157 active cases and 67,273 closed cases was used to compile the tables describing TANF recipient characteristics.  The statistical data are estimates derived from samples and are therefore subject to sampling and non-sampling errors, and because of this they may differ from data presented in other parts of the report. Statistical specifications can be found under the section titled "Reliability of Estimates."

Figure A illustrates the reasons for case closure in FY 2010.  However, understanding the reasons for case closure is limited by the fact that States reported 21.6 percent of all cases as closed due to “other” unspecified reasons.  For example, while independent studies have typically found that half or more of families that stop receiving assistance leave as a result of employment, States reported only 16.6 percent of cases closing due to employment.  Many closures due to employment are coded as failure to cooperate or as some other category because at the point of closure, the agency often is unaware that the client became employed. 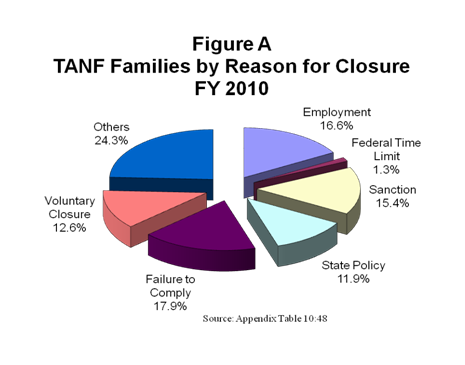 Of the total families with no adult recipients, over half had a parent living in the household but not receiving benefits.  These parents did not receive benefits for a number of reasons, including receipt of SSI benefit, an unknown citizenship/alienage status, or a sanction status for failure to comply with work requirements, attend school, or cooperate with child support.  Figure B illustrates the reasons that parents who are living in the household are not included in the assistance unit, as a percentage of all child-only families. 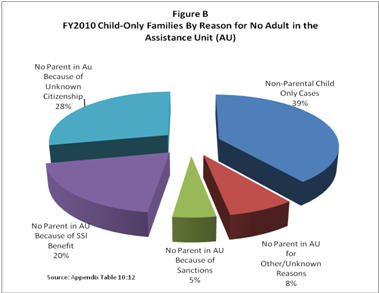 There were about 2.04 million adults living in TANF households in FY 2010.  Of all those adults, 53.1 percent were TANF recipients which show some increase when compared to FY2009 adults in TANF households.  Of those not receiving assistance, 68.7  percent were parents, 29 percent were non-parent caretakers, and 2.3 percent were other persons whose income was considered in determining eligibility (see Appendix Table 10:9).

Among all TANF adult recipients twenty-nine percent worked in unsubsidized or subsidized jobs, 10.9 percent were engaged in job training or educational activities, 8.1 percent participated in job search activities, and another 4.1 percent were engaged in other statutorily listed work activities.  Some TANF adults were involved in two or three work activities.  Those participating did so for an average of 23.3 hours per week, and some adults participated even though they were work exempt.

The average monthly amount of assistance for TANF recipient families was $392 in FY 2010.  Monthly cash payments to TANF families averaged $327 for one child, $412 for two children, $497 for three children, and $594 for four or more children.  Some TANF families who were not employed received other forms of assistance such as child care, transportation and other supportive services.

It is important to note that the employment data presented here is somewhat different from those presented in the “Work Participation Rates” and “Work and Earnings” sections of the report.  The data presented here represents the labor market status of adult TANF recipients and classifies individuals as employed, not employed, or not in the labor force.  Data presented elsewhere displays the type of work activities TANF adults are participating in using additional activity categories.

In cases where a few States submitted questionable data, the data from those States were eliminated.  In cases where States reported large numbers in “unknown” or “other” categories, HHS urges caution in drawing conclusions on the basis of the data.
The statistical data are estimates derived from samples and, therefore, are subject to sampling errors as well as nonsampling errors.  Sampling errors occur to the extent that the results would have been different if obtained from a complete enumeration of all cases.  Nonsampling errors are errors in response or coding of responses and nonresponse errors or incomplete sample frames.

Every effort is made to assure that a list of the universe or the sample frame is complete.  It is possible, however, that some cases receiving assistance for the reporting month are not included.  There is no measure of the completeness of the universe.