The Temporary Assistance for Needy Families (TANF) Program is a $16.5 billion block grant to states, territories, and eligible tribes to provide assistance to low-income families and support a range of services to improve employment and other child and family outcomes. States have broad flexibility in how they spend their TANF and maintenance-of-effort (MOE) funds, and they report their expenditures quarterly to the Administration for Children and Families (ACF). This annual release of financial data reveals state priorities, effects of past policy choices, and how the TANF program has changed over time.

The fiscal year (FY) 2015 national data show that less than half of the $31.7 billion in TANF and MOE funds were spent on the combination of basic assistance; work, education, and training activities; and child care. FY 2015 was the first year that states used a revised financial reporting form (the ACF-196R), which clarifies and expands the list of expenditure categories and also improves the accounting methodology. This new level of detail reveals that states spent about 15 percent of TANF and MOE funds on the combination of child welfare services, pre-kindergarten and Head Start programs, and services for children and youth (including after-school programs and home visiting).

Use of TANF and MOE Funds 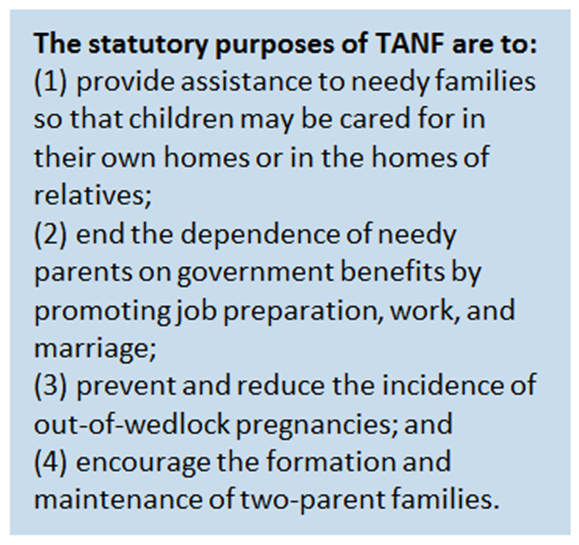 TANF funds monthly cash assistance payments to low-income families with children, as well as a wide range of services that are “reasonably calculated” to address the program’s four broad purposes. As a condition of receiving federal TANF funds, states are required to spend a certain amount of their own funds (MOE) on TANF-allowable activities. Many states spend additional funds above the required amount 1 . States also may expend federal TANF funds on activities previously permitted under the Aid to Families with Dependent Children program but not otherwise permitted under TANF (i.e., activities “Authorized Solely Under Prior Law” such as certain expenditures for children involved in foster care or the juvenile justice system). States may transfer up to a total of 30 percent of their TANF funds to either the Child Care Development Fund (CCDF) or the Social Services Block Grant (SSBG) programs, with no more than 10 percent transferred to SSBG. States may reserve unobligated federal block grant funds for use in future fiscal years.

In FY 2015, combined federal TANF and state MOE expenditures and transfers totaled $31.7 billion.2 Across the country, states spent about 25 percent ($7.7 billion) of TANF and MOE funds on basic cash assistance. Less than 7 percent ($2.1 billion) of all funds were spent on work, education, and training activities, and another 17 percent ($5.4 billion) of TANF and MOE funds were used for child care (including transfers to CCDF). Combined, national spending and transfers on basic assistance; work, education, and training activities; and child care totaled 48 percent, compared with 49 percent in FY 2014. From FY 2014 to FY 2015, there was a small decrease in the dollars spent on basic assistance and work-related activities while the amount used for child care (spending and transfers) increased slightly.

FY 2015 data also show that states spent about 10 percent ($3.2 billion) of their TANF and MOE funds on program management, which includes assessments and case management services in addition to administrative and systems costs, and 8 percent ($2.6 billion) went to refundable state tax credits. About 7 percent ($2.3 billion) of all TANF and MOE funds were spent on child welfare services (reported separately for the first time in FY 2015), including foster care and child welfare services and payments authorized solely under prior law, and 6 percent ($1.9 billion) went to pre-kindergarten or Head Start programs.

Due to the modification and expansion of categories on the new reporting form, the category of “other” decreased over 10 percentage points from 15 percent in FY 2014 to 4 percent in FY 2015. 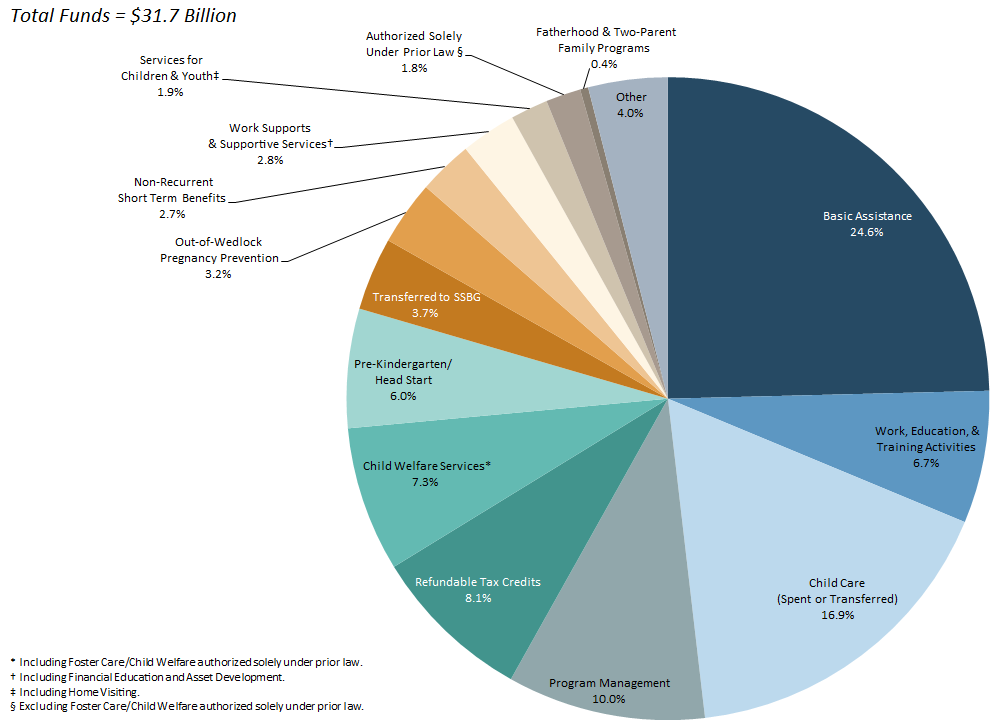 See definitions of categories at /ofa/resource/tanf-moe-spending-and-transfers-....

Spending pie charts of all 50 states and the District of Columbia are available on OFA’s website at: /ofa/tanf-and-moe-2015.

Certain categories combined in the pie chart are separated out in the published tables, which can be found here:
/programs/ofa/resource/tanf-financial-....

Figure 3. Change in Spending on Selected Categories Over Time 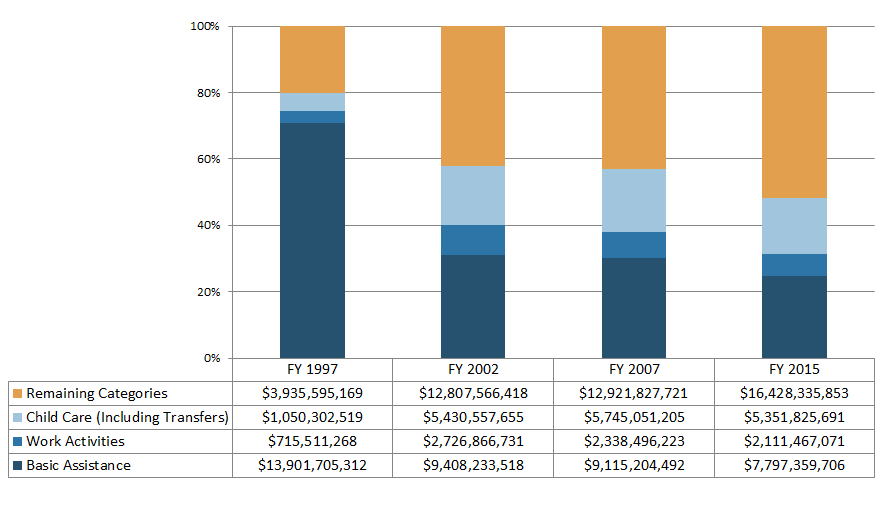 Note: Dollar amounts are in Current Dollars (not adjusted for inflation).

Prior to FY 2015, TANF financial reporting expenditure categories did not fully reflect the wide range of benefits and services funded by federal TANF and state MOE dollars, causing states to categorize many activities simply as “other” and allowing certain activities to fall into multiple categories at once. This created confusion and inconsistencies that made analyzing spending information and comparing data across states problematic. Additionally, it was difficult to understand exactly how much money had been spent in a given fiscal year, due to the cumulative reporting nature of the previous accounting method.

In an effort to increase transparency and accuracy of the TANF financial data and eliminate ambiguities and inconsistencies without placing undue burden on states, OFA created the revised reporting form ACF-196R, which does two things:

1To fulfill the MOE requirement, states must maintain state expenditures for “eligible families” to receive benefits and services related to TANF purposes in an amount equal to at least 80 percent of state spending in FY 1994 for AFDC programs related to cash assistance, emergency assistance, job training, and child care (about $11.1 billion). This amount is reduced to 75 percent (about $10.4 billion) if a state meets its work participation rates. States with excess MOE spending can receive a reduction in their work participation rate requirement.

2The reported FY 2015 financial data is current as of August 18, 2016 and may be subject to adjustments from states.

3U.S. Department of Health and Human Services, Administration for Children and Families, caseload tabulations and unpublished tabulations from the TRIM3 microsimulation model.