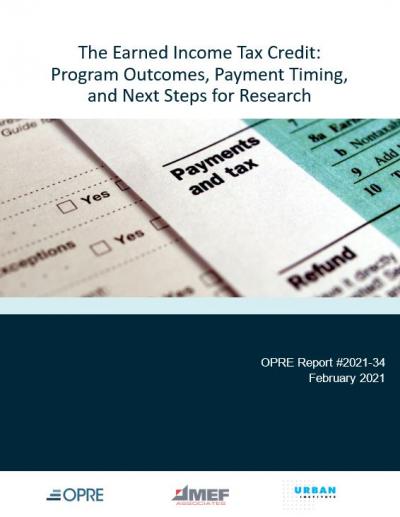 The Earned Income Tax Credit (EITC) provides substantial support for working families with low and moderate incomes, including those who may participate in traditional safety net programs, such as TANF. Based on incomes in 2019, the Tax Policy Center estimates that more than 27 million households qualified for almost $67 billion in reduced taxes and payments. The Center on Budget and Policy Priorities estimates that annually, the EITC lifts 5 to 6 million people out of poverty and reduces the depth of poverty for many more. The structure and timing of EITC payments is an important feature of the credit, and they potentially mediate its benefits and effects for recipients. In particular, the annual, lump-sum nature of the credit payment creates potential challenges for recipients and has been the subject of attention from researchers and policymakers.

This brief reviews the design of the EITC and summarizes evidence on the relationship between the EITC and work, wages, poverty, financial stability, and other nonfinancial benefits for credit recipients. The authors conclude that research shows the EITC provides substantial support for working families with low and moderate incomes.

This brief also considers how the EITC’s effects may be sensitive to how the credit is paid. Several EITC proposals reflect a view that paying the credit periodically may be appropriate, and recent evidence from a small number of experiments also suggests that recipients of periodic payments found them useful. The brief concludes by identifying promising directions for future research.

This brief reviews the design and administration of the EITC and summarizes the literature on the EITC’s effects on work, wages, poverty, financial stability, and other nonfinancial benefits, giving special attention to the way program outcomes might depend on or relate to payment timing. The authors discuss how changing the EITC’s payment structures may affect recipients and how the Internal Revenue Service (IRS) carries out the EITC to highlight important considerations and possible trade-offs. The brief identifies areas where additional research is needed to better understand these relationships and trade-offs related to payment timing.

This brief reviews the literature on several aspects of the EITC’s design and credit administration, such as payment timing, size of payments, and credit participation. The brief also summarizes evidence on the relationship between the EITC and work, wages, poverty, financial stability, and other nonfinancial benefits for credit recipients. In summarizing the empirical literature, the brief focuses on journal articles and articles from think tank websites that were published in the past 5 years. The evidence cited includes a small number of demonstration projects, quasi-experimental research, and econometric analyses.

The brief then discusses how the EITC’s effects may be sensitive to how the credit is paid, drawing on a range of published and unpublished literature and reports, including proposals for changing how the EITC is paid and evidence from a small number of recent experiments. The brief analyzes these sources in combination with the literature on the relationship between the EITC and recipients’ financial and nonfinancial outcomes to discuss considerations in changing the EITC’s payment structure and possible trade-offs.

Earned Income Tax Credit (EITC):
The EITC is a refundable tax credit that workers with low to moderate incomes and qualifying children may be eligible to claim when they file their tax returns.