The Enhanced Transitional Jobs Demonstration: New Perspectives on Creating Jobs – Final Impacts of the Next Generation of Subsidized Employment Programs 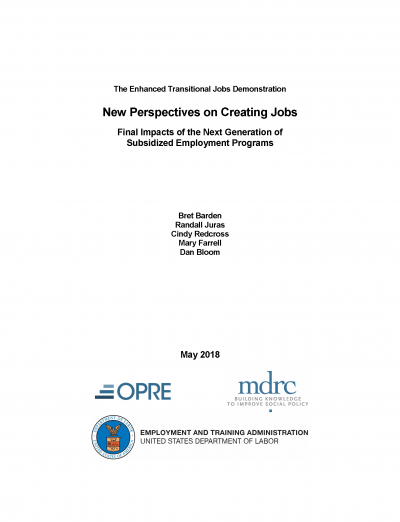 This report presents the final impacts from the U.S. Department of Labor’s Enhanced Transitional Jobs Demonstration (ETJD), which included two sites that are part of ACF’s Subsidized and Transitional Employment Demonstration (STED). ETJD tested seven transitional jobs programs that targeted people recently released from prison or unemployed parents who did not have custody of their children. The ETJD programs were “enhanced” in various ways to address the shortcomings of previous programs. Two of the ETJD grantees which served non-custodial parents, Atlanta and San Francisco, were evaluated as part of the STED study. The two evaluations – STED and ETJD – closely coordinated beyond the shared sites, including shared reports, common data collection instruments, and other ongoing collaboration.

The study tested seven transitional jobs programs that targeted either people recently released from prison or unemployed non-custodial parents who had fallen behind in child support payments. The ETJD programs were “enhanced” in various ways relative to transitional jobs programs studied in the past. The programs were designed to help hard-to-employ individuals “learn to work by working,” in order to improve their ability to get and hold unsubsidized jobs. Because the ETJD programs targeted noncustodial parents and recently incarcerated individuals, they also aimed to increase payment of child support and reduce recidivism, outcomes that may be tied to employment.

The impact study used a randomized controlled trial design in which individuals eligible for and interested in the programs were randomly assigned to either a program group, which was offered the program’s services, or to a control group, which was not offered those services. The study evaluated impacts on employment and earnings, education and training, and well-being. Data sources for the impact study included administrative records on wages, NDNH data, subsidized employment payroll records, and surveys conducted approximately 12, and 30 months after participants entered the study.

The cost study assessed the cost of the programs per program group members and compared this value with similar programs and programs serving a similar population. To determine the cost of the programs, the research team examined operating costs, costs of support services, and wages and payroll costs. These are one-year cost estimates, reflecting service participation sample members reported in survey administered 12 months after random assignment.