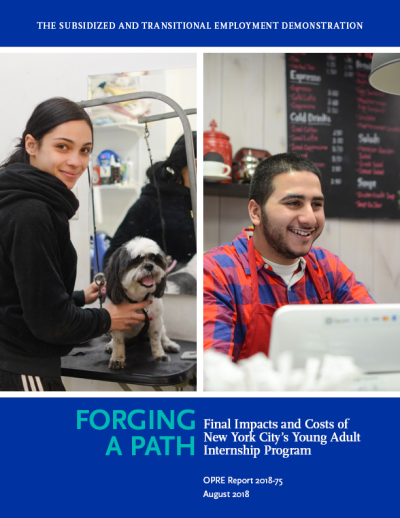 This report presents 30-month impact results from a random assignment evaluation of the Young Adult Internship Program (YAIP), a subsidized employment program for young people in New York City who have become disconnected from school and work. Operated by various provider agencies, YAIP offers disconnected young people between the ages of 16 and 24 a temporary paid internship, as well as various support services.

The YAIP evaluation was part of the larger Subsidized and Transitional Employment Demonstration, sponsored by the Administration for Children and Families in the U.S. Department of Health and Human Services. From July 2013 to March 2014, program staff assigned nearly 2,700 young people at random to either a program group, which was offered YAIP services, or to a control group, which was not offered those services. The YAIP evaluation measured outcomes for both groups over time to assess whether YAIP services led to better outcomes for the program group compared with those of the control group.

This report, the second of two from the YAIP evaluation, examines whether the program improved young people’s outcomes 30 months after study enrollment. An analysis of youth outcomes indicates that young people in the program and control groups were faring similarly after 30 months, with program group members slightly more likely to report employment on a survey administered roughly 30 months after random assignment. However, administrative data did not show employment effects, suggesting that the program may have increased informal or independent employment. A cost analysis found that the program cost $5,431 per participant, which is at the lower end of the spectrum of costs of similar programs.

For many young people, the time between one’s late teenage years and early twenties encompasses several important milestones, including graduating from high school, attending college, entering the workforce, and beginning to establish economic independence. However, 12.3 percent of young people in the United States between the ages of 16 and 24 — 4.9 million people in total — are neither in school nor working. These “disconnected youth” or “opportunity youth” face serious challenges to achieving labor market success and self-sufficiency in adulthood.

YAIP is intended to help reengage young people who have fallen off track, thereby reducing their risk of long-term economic hardship. MDRC conducted a random assignment evaluation of YAIP to determine whether the program makes a difference in the lives of the young people it serves.

As expected, YAIP’s offer of subsidized employment led to large improvements in employment and earnings during the first year of follow-up, more than doubling earnings and increasing employment by nearly 30 percentage points compared with the control group. Further, findings suggest that the program group worked in slightly better jobs than the control group for over a year after most people had left the program. However, at the end of the 30-month follow-up period, program group members had not successfully made the transition into one of YAIP’s key outcomes — education, employment, the military, or training — at a higher rate than they would have in the absence of the program. The program group also earned about the same amount of money as the control group. YAIP did increase survey-reported employment at the end of the follow-up period, but not employment as measured by administrative employment records, indicating that program group members may have been more likely to hold jobs in the informal economy or as independent contractors. YAIP did not lead to any statistically significant effects in the domains of education or well-being.

Long-term program effects did not vary much across different populations and locations. Subgroups of participants that benefited the most from YAIP’s services in the short term did not retain many long-term benefits. During the one-year follow-up period, populations with larger barriers to employment at study enrollment (namely, those without a high school credential or those who were disconnected for longer) benefitted the most from the program, but those benefits did not last through 30 months of follow-up. Further, program group members in the YAIP locations that provided the strongest contrast of services relative to their local alternatives, as measured by earnings in the first year of follow-up, did not perform better on key outcomes than their control group counterparts 30 months after the program began.

The impact study used a randomized controlled trial design in which individuals eligible for and interested in YAIP were randomly assigned to either a program group, which was offered YAIP services, or to a control group, which was not offered those services. The study evaluated impacts on employment and earnings, education and training, and well-being. Data sources for the impact study included administrative records on wages and postsecondary enrollment, subsidized employment payroll records, and surveys conducted approximately 4, 12, and 30 months after participants entered the study.

The cost study assessed the cost of the program per program group member and compared this value with similar programs and programs serving a similar population. To determine the cost of the program, the research team examined operating costs, costs of support services, and wages and payroll costs recorded in Fiscal Year 2014 — the period when all sample members received the majority of their services — using data supplied by YAIP providers and oversight organizations.