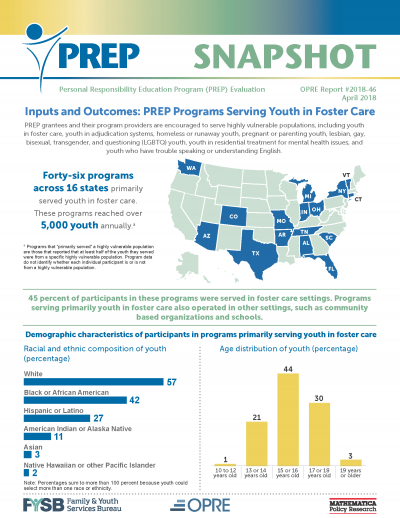 This brief summarizes key characteristics of programs funded through the Personal Responsibility Education Program (PREP) that reported at least half of the youth they served were in foster care. PREP, which aims to reduce teen pregnancies, sexually transmitted infections, and associated risk behaviors, is administered by the Family and Youth Services Bureau within the Administration for Children and Families (ACF) of the U.S. Department of Health and Human Services. Funding is awarded to states and territories through formula grants (State PREP), and through a competitive process to tribes and tribal entities (Tribal PREP) and to direct service providers in states and territories that did not take State PREP funding (Competitive PREP).

This brief is one in a series that will inform stakeholders and the public about the PREP program.

Forty-six programs across 16 states reported primarily serving youth in foster care. These programs served about 5,000 youth each year, largely through foster care settings. Most youth in these programs reported being White or Black or African American, and most were ages 15 to 18. About two-thirds of youth reported being sexually active before entering the program. After PREP, more than one-third of the youth in these programs reported they were less likely to have sex in the next six months, and a large majority reported they were more likely to use condoms and birth control if they have sex.