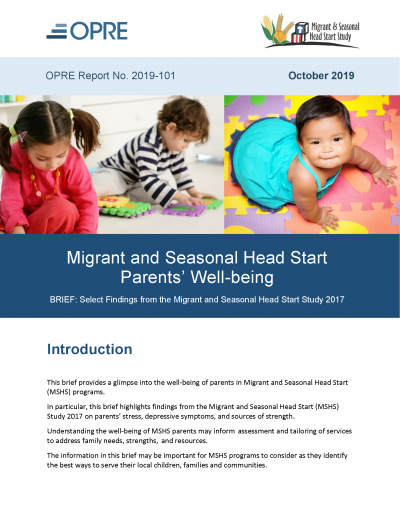 This brief provides a glimpse into the well-being of parents in Migrant and Seasonal Head Start (MSHS) programs.

In particular, this brief highlights findings from the Migrant and Seasonal Head Start (MSHS) Study 2017 on parents’ stress, depressive symptoms, and sources of strength.

The purpose of the brief is to describe MSHS parents’ stress, depressive symptoms, and sources of strength.

The Migrant and Seasonal Head Start (MSHS) Study 2017 provides a national picture of MSHS programs, centers, families, and children. The MSHS Study was designed through extensive engagement and input from the MSHS community to better understand:

This brief highlights selected MSHS Study findings collected from surveys of program directors, center directors, and interviews with parents. The MSHS Study was conducted by Abt Associates in partnership with Catholic University of America and Westat. For additional information visit: /opre/research/project/migrant-and-seasonal-he....

Understanding the well-being of MSHS parents may inform assessment and tailoring of services to address family needs, strengths, and resources. The information in this brief may be important for MSHS programs to consider as they identify the best ways to serve their local children, families, and communities.