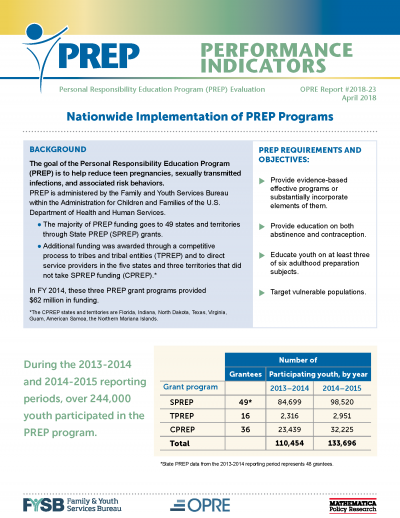 This brief summarizes key characteristics of programs funded through the Personal Responsibility Education Program (PREP), which aims to reduce teen pregnancies, sexually transmitted infections, and associated risk behaviors. PREP is administered by the Family and Youth Services Bureau within the Administration for Children and Families (ACF) of the U.S. Department of Health and Human Services. Funding is awarded to states and territories through formula grants (State PREP), and through a competitive process to tribes and tribal entities (Tribal PREP) and to direct service providers in states and territories that did not take State PREP funding (Competitive PREP).

This brief is one in a series that will inform stakeholders and the public about the PREP program.

More than 244,000 youth participated in the PREP program during the 2013–2014 and 2014–2015 reporting periods. Across the country, 3,545 facilitators served youth in 543 PREP programs operated by 472 providers. The most common evidence-based program models implemented were Making Proud Choices!, Teen Outreach Program (TOP), Be Proud! Be Responsible!, and Reducing the Risk. The most common adulthood preparation subjects implemented were healthy relationships, healthy life skills, and adolescent development.