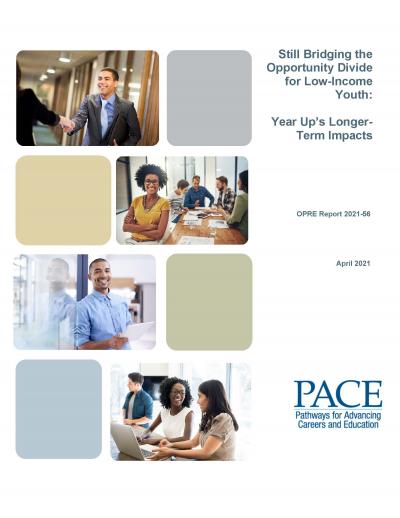 This report presents further evidence on the impacts of Year Up, a national training program for young adults aged 18-24 with high school credentials. Specifically, it extends earlier analyses to cover a three to five-year follow-up period and provides a cost-benefit analysis.

Run by an organization of the same name, Year Up is a national program operating from offices in nine major cities. The full-time, one-year program serves young adults who are disconnected from work and school, or at risk of disconnection, and are motivated to do well in the program. Year Up is divided into two six-month phases: an initial training phase (“Learning and Development,” or “L&D”), followed by an internship phase. It provides three main categories of services:

Year Up is one of nine programs included in the Pathways for Advancing Careers and Education (PACE) project sponsored by the Administration for Children and Families (ACF) within the U.S. Department of Health and Human Services. PACE is testing different strategies for helping economically disadvantaged adults access career pathways in growing occupations. This report (a product of the Career Pathways Intermediate Outcomes Study) extends follow-up to a period centering on three years and extending to five years for some outcomes. A future report (under the Career Pathways Long-term Outcomes Study) will cover an even longer follow-up period.

Year Up’s mission is to close the “Opportunity Divide” — the gap between millions of disadvantaged young adults and U.S. firms seeking to find well-qualified entry-level workers in technical fields. The program’s twin goals are to help young adults access well-paying careers with good potential for upward mobility and address shortages of needed workers in growing occupations. The purpose of the research undertaken here was to evaluate whether Year Up was successful in increasing earnings and related outcomes, and whether its benefits exceeded its costs.

This report begins to address the above questions. Its principal findings include the following:

The impact on average quarterly earnings in follow-up Quarters 12 and 13 (this report’s confirmatory outcome) was large, at $1,857, and statistically significant. This impact represents a 38 percent increase over average earnings for the control group ($4,926). Impacts of about $2,000 per quarter extended to the end of this report’s five-year follow-up period.

From Year 3 on, college enrollment rates were virtually identical in the treatment and control groups. At the time of the three-year follow-up survey, few members of either group had earned an associate degree or higher, although the fraction was lower for treatment (4 percent) than control (8 percent) group members.

Findings from the three-year survey show reductions in public benefit receipt, debt, and financial hardship. Average household income did not increase—perhaps because increased earnings both reduced some households’ public benefit eligibility and allowed some young adults to live independently. Year Up had a few small effects on living arrangements, but no impacts on several psycho-social outcomes.

Results show that Year Up was financially worthwhile for society overall, as well as for participants. The net gain to society was $15,349 per participant—the difference between a net benefit of $38,484 and a net cost of $23,135. These estimated benefits and costs imply that society gained $1.66 for every $1.00 spent on Year Up. 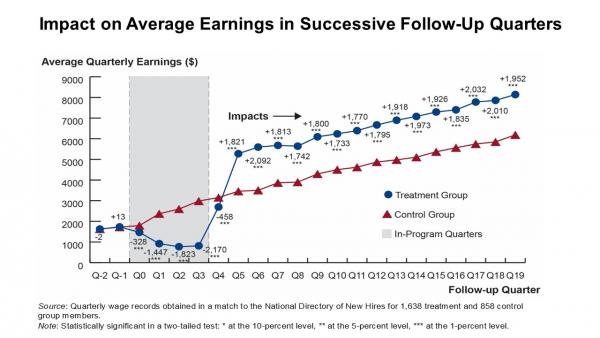 The evaluation used an experimental design, which randomly assigned 2,544 eligible young adults to either a treatment group that was encouraged to enroll in Year Up or a control group that was not allowed to participate. Researchers measured outcomes for both groups over time and compared average outcomes over successive follow-up intervals. The main data sources for measuring outcomes were: (1) a follow-up survey conducted three years after random assignment and (2) administrative records from the National Directory of New Hires (quarterly wage records) and the National Student Clearinghouse (college enrollment and other transcript records) extending for up to five years after random assignment. The study also included a cost-benefit analysis.