The Subsidized and Transitional Employment Demonstration: Cost Analysis of the STEP Forward Program 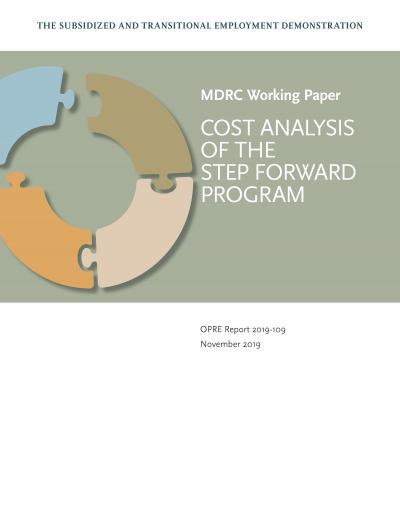 STEP Forward was a voluntary program in San Francisco that aimed to connect low-income job seekers to the labor market by using public funds to temporarily subsidize individuals’ wages, known as subsidized employment, with the goal of ultimately increasing permanent unsubsidized employment among this population. The program was operated by the Human Services Agency of San Francisco (HSA) under the umbrella of JOBsNOW!, HSA’s broader subsidized employment initiative. STEP Forward offered job seekers opportunities to interview for jobs with private sector employers at weekly job fairs and offered employers temporary wage subsidies if they hired disadvantaged job seekers whom they might not otherwise hire. A diverse group of low-income job seekers enrolled in the program, the vast majority of whom were either CalWORKs (California’s Temporary Assistance for Needy Families program) clients, individuals who had exhausted their unemployment insurance benefits, or CalFresh (California’s Supplemental Nutrition Assistance Program) recipients.

To test the effectiveness of this strategy and to learn about its costs, the Administration for Children and Families (ACF) in the U.S. Department of Health and Human Services funded a random assignment evaluation of STEP Forward, in which individuals were randomly assigned to a program group that had access to STEP Forward services or to a control group that did not have access to STEP Forward services but could receive other services in the community. A total of 837 adults were enrolled into the STEP Forward study between November 2012 and March 2015. In the first year after random assignment when program group members who were placed in subsidized employment were still receiving subsidized wages, program group members were more likely than control group members to have been employed and had higher average earnings. Impacts on earnings continued into the fourth year, well after the subsidies had ended.

This paper presents the one-year costs of STEP Forward, including program services such as job-readiness services and the subsidized portion of wages provided to program group members. It also presents the costs of non-STEP Forward services available to both program group and control group members, which included education, training, and job skills services. This evaluation is part of a larger demonstration called the Subsidized and Transitional Employment Demonstration (STED). In addition to STEP Forward, STED includes random assignment evaluations of six other subsidized employment strategies around the country. MDRC, a nonprofit, nonpartisan research organization, is leading the project under a contract with ACF along with its partner, MEF Associates. Longer-term findings from all STED random assignment evaluations are included in a separate synthesis report, while earlier findings discussing the implementation of STEP Forward and early impacts are in a separate interim report.

The purpose of the cost study is to determine what it cost to provide STEP Forward services to a single program group member once STEP Forward had reached a steady state of operation. The analysis estimates the costs per sample member in two categories: STEP Forward program costs and non-STEP Forward costs, which include remedial education, postsecondary education, vocational training, and job skills services.

The cost of STEP Forward was assessed using program expenditure reports, program survey data, and public data sources. The cost of STEP Forward program services were estimated by summing direct program expenditures from July 2013 through June 2014 and dividing by the number of program group members enrolled during that period. To estimate the cost of non-STEP Forward program services, the research team first determined the unit cost, or the cost of serving one person for a specific unit of time (for example, one month). Multiplying the unit cost by the average length of time sample members received each service gives the average cost incurred per sample member.