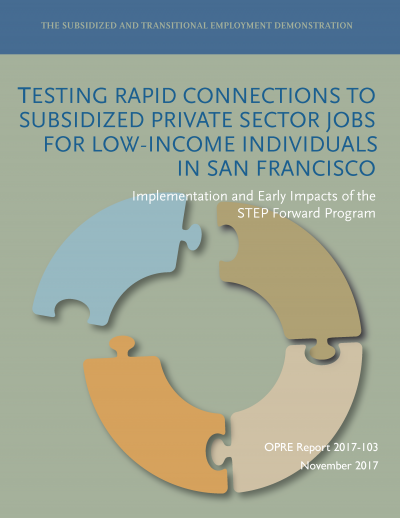 Securing unsubsidized employment in a competitive labor market can be difficult for low-income job seekers in an economy that is increasingly driven by highly skilled technical and professional employment. This is particularly the case in San Francisco, whose tech boom has received national attention for dramatically, but unevenly, affecting the city’s economic landscape. San Francisco has a scarcity of opportunities for individuals who are less educated or lack the higher skills required by the jobs that have driven the economy’s growth. More than ever, securing stable employment is a must for lower-income workers in both San Francisco and the United States at large. While subsidized jobs can be designed to teach participants basic work skills, give them work experience that can be used on future résumés, or help them get a foot in the door with employers, past research has found mixed results regarding these programs’ ability to affect participants’ employment rates or earnings in the long term.

The STEP Forward program attempted to address these issues by offering job seekers opportunities to interview for jobs with private sector employers at weekly job fairs, and by offering employers temporary wage subsidies to encourage them to try out job seekers whom they might not otherwise hire, with the goal of ultimately hiring these works into permanent unsubsidized employment. A diverse group of low-income job seekers enrolled in the program, the vast majority of whom were either CalWORKs (California’s Temporary Assistance for Needy Families program) clients, individuals who had exhausted their unemployment insurance benefits, or CalFresh (California’s Supplemental Nutrition Assistance Program) recipients.

This report presents implementation findings and interim impact results (with a one-year follow-up) from a random assignment evaluation of STEP Forward.

Findings from the report include the following:

The impact study uses a randomized controlled trial design in which individuals eligible for and interested in the subsidized jobs program were randomly assigned to STEP Forward, or to a control group that does not have access to the STEP Forward services. This design makes it possible to compare the STEP Forward group with the control group. The study will evaluate impacts on employment and earnings, and personal well-being, among other areas. Data sources for the impact study include administrative wage records, subsidized employment payroll records, and a survey conducted approximately 12 months after participants entered the study.