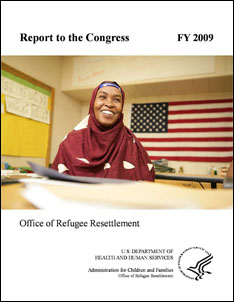 The Office of Refugee Resettlement’s (ORR) commitment to helping refugees and other vulnerable populations – including asylees, Cuban/Haitian entrants, unaccompanied refugee minors, victims of torture, unaccompanied alien children, and victims of human trafficking – remains as strong as ever. ORR understands that refugees have inherent capabilities and it strives to provide the benefits and services necessary to help refugees and other vulnerable populations become self-sufficient and full participants in American society. In 2009, ORR served thousands of vulnerable people through its various grants and services, administered at the state government level and via non-profit organizations.

ORR provided eight months of cash and medical assistance for all eligible, newly arriving refugees during FY 2009, as well as funding for through formula and discretionary grants for social services to help refugee populations for up to five years after their arrival.

ORR is proud of its accomplishments in 2009. Several ORR programs are highlighted below:

ORR tracked state and county performance in FY 2009 for outcome measures related to refugee economic self-sufficiency. In FY 2009, the caseload of 91,957, which included employable adults resettled in previous years, increased by 21 percent over FY 2008 (76,032). Sixty-nine percent of refugees who found employment were still employed 90 days later, a seven percent decrease from FY 2008. Sixty-one percent of full-time job placements offered health insurance, a two percent decrease from FY 2008. The rate of job placements was 40 percent, compared to 49 percent in FY 2008.

ORR’s Matching Grant Program (MG) operates through nine national voluntary agencies and their networks of approximately 210 offices in 43 states and the District of Columbia. The objective of the program is to guide enrolled cases toward economic self-sufficiency within four to six months of program eligibility. In program year (PY) 2009, 28,444 refugees, Cuban/Haitian entrants, asylees, special immigrant visa holders, certified victims of human trafficking, and Amerasians enrolled in the MG Program with $59.9 million in funding from ORR. In spite of challenging economic conditions, MG service providers successfully employed 47 percent of all employable adults within 120 days of eligibility. This resulted in a 52 percent self-sufficiency rate at day 120 and a 67 percent self-sufficiency rate at day 180. The MG program also attained an average full-time hourly wage of $8.65.

ORR’s Microenterprise Program helped recently arrived refugees who possessed few personal assets and who lacked credit history to start, expand, or sustain a small business. ORR funded 18 grantees nationwide for a total of $4 million to help refugees start various businesses, including ethnic restaurants, daycare programs, taxicab and limo services, and cleaning companies. In FY 2009, about 10,800 refugees were served in the Microenterprise Program. Of those served, 6,723 were new business starts, 1,291 were expansions of existing businesses, and 2,767 represented strengthening or stabilization of existing businesses. The above businesses created 9,077 jobs for other low-income refugees.

Through its network of caretakers, ORR’s Unaccompanied Refugee Minors Program continued to offer specialized foster care and case management, designed to meet the special needs of unaccompanied refugee, asylee, Cuban and Haitian entrant, and trafficked children, and to help them develop appropriate social skills to enter adulthood. In FY 2009, 946 youth were served in this program.

In FY 2009, ORR’s Unaccompanied Alien Children’s (UAC) Program continued to provide care and placement for unaccompanied alien children who left their home countries for a variety of reasons to include to rejoin family already in the U.S., to escape abusive relationships or violence in their home country, or to find work to support their families in their home country. Most of the children in ORR’s custody and care were from Honduras, Guatemala, and El Salvador. The majority of children were cared for through a network of ORR-funded facilities, most of which are located close to areas where immigration officials apprehend large numbers of UACs. With an operating budget of $132.6 million in FY 2009, ORR funded approximately 1,600 beds on a daily basis and provided care for 6,644 children over the course of the year in its various housing facilities during FY 2009, a decrease of 8 percent from FY 2008. An average of approximately 1,292 children were in care at any point in time.

In FY 2009, ORR issued 330 certification letters to adult victims of human trafficking and 50 eligibility letters to child victims of human trafficking, for a total of 380 victims. Additionally, ORR issued one “Interim Assistance Letter” to a child who later received an Eligibility Letter. The 18 street outreach grantees identified approximately 1,111 potential victims of human trafficking, while three intermediary organization contractors made contact with nearly 404 potential victims. The 18 Rescue and Restore Victims of Human Trafficking Regional Program grantees made contact with 264 victims, or suspected victims, in their work by fostering connections between ORR’s Rescue and Restore Victims of Human Trafficking public awareness campaign and local awareness building and service provision. In addition, 393 precertified victims, 450 certified victims, and 81 derivative family members also received services through a per capita contract that makes financial support available to organizations throughout the country that provide services to victims.

In other areas of its operations, ORR:

View all of ORR’s Annual Reports to Congress, including archived versions