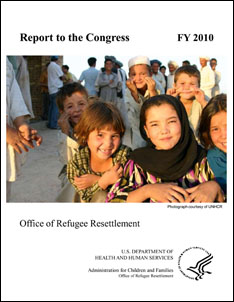 The Office of Refugee Resettlement’s (ORR) commitment to helping refugees and other vulnerable populations – including asylees, Cuban/Haitian entrants, unaccompanied refugee minors, victims of torture, unaccompanied alien children, victims of human trafficking, and repatriated U.S. citizens– remains as strong as ever. ORR understands that refugees have inherent capabilities and it strives to provide the benefits and services necessary to help refugees and other vulnerable populations become self-sufficient and integrated members of American society. In Fiscal Year (FY) 2010, ORR served thousands of vulnerable populations through its various grants and services, administered at the state government level and via non-profit organizations, within an extensive public-private partnership network.

In FY 2010, ORR implemented a number of new initiatives and programs to improve its response and strengthen existing programs and practices. Foremost among them was the release of ORR’s Six Guiding Principles, outlining ORR’s approach to service. These guidelines inform ORR’s commitment to the populations it serves, and the partners with which it works.

ORR’s Coordinated Placement Program became another key initiative in FY 2010, stemming from a series of National Security Staff (NSS)-led interagency meetings between the U.S. Department of Health and Human Services (HHS)/ORR and Department of State/Bureau of Population, Refugees, and Migration (PRM). ORR and PRM instituted quarterly placement consultation meetings with a range of resettlement stakeholders, including resettlement agencies, State Refugee Coordinators, Refugee Health Coordinators, Ethnic Community Based Organizations and ORR technical assistance providers to share timely information on refugee arrivals and available relevant data and resources to assist DOS with initial placement decisions. This collaborative approach was designed to enhance and inform subsequent resettlement services, and meet the needs of refugees more effectively while promoting their self-sufficiency and successful integration in the United States.

Two of ORR’s programs warrant special mention: the Microenterprise Development (MED) and Individual Development Accounts (IDA) programs. Modeled after mainstream small-scale lending and matched savings programs, ORR’s MED and IDA programs are notable not only for their successes in helping newly-arrived refugees open and manage their own businesses (nearly 1,000 in FY 2010), or pursue higher education and home ownership opportunities (assets valued at more than $40 million purchased since 2005), but also in the much lower default and higher completion rates than those seen in the mainstream counterpart programs. Even more impressively, refugees enrolled in ORR’s MED and IDA programs have used these savings to leverage millions of dollars in additional resources, expanding businesses and opening the door to higher levels of success and self-sufficiency—all within the first few years after resettlement.

ORR’s programs and eligible populations expanded in several unanticipated ways in FY 2010, beginning with the Department of Defense Appropriations Act of 2010 (P.L. 111-118), which extended Afghan and Iraqi Special Immigrants’ eligibility period for ORR benefits and services to the same extent and time period as refugees. This change gave Afghan and Iraqi Special Immigrants access beyond the eight month mark, to up to five years for certain ORR Refugee Social Services (RSS), and for services under ORR discretionary grants as available.

In FY 2010, ORR also began serving a newly eligible group of youth – those who have a Special Immigrant Juvenile Status (SIJS). The William Wilberforce Trafficking Victims Protection Reauthorization Act of 2008 (P.L. 110-457) made certain youth (those granted SIJS by the Department of Homeland Security) eligible for the Unaccompanied Refugee Minors (URM) program. Certain youth are granted SIJS if they are found to have been abused, abandoned or neglected by one or both parents, and reunification with the parents was not deemed viable. Through its network of caretakers, ORR offered specialized foster care to unaccompanied refugee minors, designed to meet their special needs and to help them develop social skills to enter adulthood.

Finally, in one of the most complex emergency evacuation responses in recent U.S. history, ORR’s Repatriation program provided assistance to approximately 28,000 U.S. citizens and others repatriated from Haiti, following the catastrophic earthquake in January 2010. From January 14 through February 20, 2010, ORR worked with state partners in Florida, New Jersey, South Carolina and Maryland to provide services to repatriates who arrived on one of 835 flights during the 38-day period. In addition, ORR released to prospective adoptive parents approximately 700 unaccompanied Haitian children whose adoptions had not been completed in Haiti prior to their evacuation to the U.S.

Overall, in FY 2010, the Office of Refugee Resettlement reaffirmed its commitment to being an effective bridge linking newly-arrived refugees with mainstream and specialized services, with special emphasis on expanding the network’s access to external funding and support. In just one example of this push to help diversify our partners’ portfolios, ORR established effective partnerships with the U.S. Department of Agriculture (USDA) and private organizations that have resulted in nine out of ten former Refugee Agricultural Partnership Program (RAPP) grantees and other network agencies receiving USDA assistance or other grants. These grants included local-funded support for refugees to improve production in community gardens or on small-scale farms, sell produce, access healthy and familiar foods, and better adjust to their communities—contributing to the overall health and well-being of refugee families in ways that far exceed the simple output of their gardens. In April 2010, First Lady Michelle Obama visited a RAPP-funded garden in San Diego, and remarked, “This is a model for the nation, a model for the world.”

In this vein, ORR’s vision for FY 2011 is centered on programs designed to support the most vulnerable and often-marginalized refugees. These programs include targeted services for lesbian, gay, bisexual and trans-gender (LGBT) refugees, and the expansion of ORR’s Microenterprise Development Program to offer a Home-Based Child Care training program, to lead refugee mothers in career paths that ensure family self-sufficiency, culturally-appropriate and competent child care for themselves and other refugee families in their communities, and the development of a solid and transferrable skill set for small business management.

These programs reflect the changing needs of incoming refugee populations, and feedback ORR has received from its partners and stakeholders across the country. They also are indicative of ORR’s commitment to client-centered programming, to ensure that the U.S. refugee program is responsive and accountable to the needs of its stakeholders.

This is the goal for the program as a whole; the six Guiding Principles are the first step in that direction.

View all of ORR’s Annual Reports to Congress, including archived versions