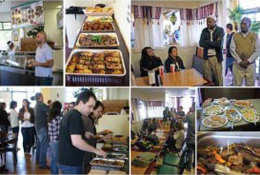 Both business-owners spoke about their experiences as entrepreneurs and their plans for the future of their businesses.

Safaa Al Bazzaz runs Samoon Baker & Restaurant. He arrived in San Diego in January 2009 with his father, mother and brother. He had more than 10 years’ experience with his family business back in Iraq. Safaa is a civil engineer by trade. Upon arriving in the United States, Safaa realized that engineering positions were going to be difficult to find, and began studying the market for other business opportunities that would fill the needs of the market.

He settled on the idea of opening an Iraqi restaurant for the growing Iraqi population El Cajon. With the assistance of IRC's Microenterprise program, the restaurant opened in the summer of 2011.

Samoon Bakery and Restaurant has already built a loyal clientele. One of the many reasons for Samoon's success is the inclusion of authentic Iraqi "Samoon" bread, which many Iraqi residents of San Diego would previously have shipped in from across the United States. The restaurant also offers both eastern and western cuisine items, including a wide variety of desserts.

The Fatuma Restaurant is owned by Abdikadir Osman, whose journey in San Diego began in 1990. He worked several jobs over the years in various industries but wanted to be his own boss and find a reliable way to support his growing family. He started with a small grocery store in 1998, where he quickly became a well-respected business-man within the Somali community.