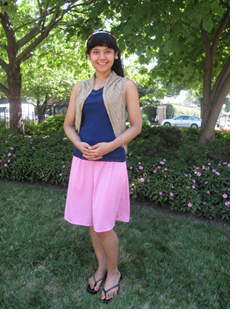 An estimated 158 million children aged 5-14 are engaged in child labor — nearly one in six children in the world according to the United Nations Children’s Fund. Rarely do any of these children ever escape the pesticides, chemicals, dangerous machinery, hidden workshops or the sex-trade industry they have been exposed to or forced into against their will.

But a little girl’s hope for humanity overcame the odds.

Sam Yamin Tun Nyi-Chay had just turned 14 when she decided to escape her horrible situation in Burma. She was in forced labor constructing roads, living with an abusive stepfather.

Yamin was determined to find a better life and fled to the old capital of Burma, the city of Rangoon, to search for her father. She spent the next eight months searching. Yamin met a stranger that befriended her. He told her he was an “agent,” and that her father was in nearby Thailand. Yamin went ahead and put her confidence in the agent to continue her journey.

Once they arrived in Thailand, she was sold once again into additional hard labor by the man who pretended to help her.

Days went by, but rather than admit defeat and lose all faith in her fellow man, Yamin never lost hope and gambled on trusting one more soul. One day she recognized a man from her village back in Burma. Yamin went up to him and demanded that he help her. The fellow villager helped her escape to Malaysia and brought Yingichay to the U.S. embassy where she was accepted for resettlement in the U.S.

“He was like my guardian angel,” said Yamin. “I will never forget him and how he helped me from that situation.”

Yamin never heard from her guardian angel again after the United Nations High Commissioner for Refugees (UNHCR) recommended her for resettlement to America, as an Unaccompanied Refugee Minor (URM). The URM program, sponsored by the Department of Health and Human Services’ Office of Refugee Resettlement (ORR), places refugee children separated from their families with foster families in the United States.

In 2008, Yamin arrived in Grand Haven, Mich., to live with her foster family, Jim and Suzanne Greydanus, who also foster another Burmese girl. Yamin now works a part-time job in a fabric store and is attending college.

“I want to become a nurse,” said Yamin, who hopes to be successful enough to help her remaining family in Burma financially and assist other refugees with resettlement.

For more information on the Office of Refugee Resettlement, visit www.acf.hhs.gov/programs/orr/

Founded on the belief that newly arriving populations have inherent capabilities when given opportunities, the Office of Refugee Resettlement provides people in need with critical resources to assist them in becoming integrated members of American society. Since 1975, the U.S. has resettled approximately 2.6 million refugees. Today, the U.S. takes in more refugees than all other countries combined. In Fiscal Year 2010, ORR provided more than 101,000 refugees with resettlement assistance. Only less than half of one percent of the refugees in the world (around 62 million) gets resettled. For more information, visit www.acf.hhs.gov/programs/orr/index.html